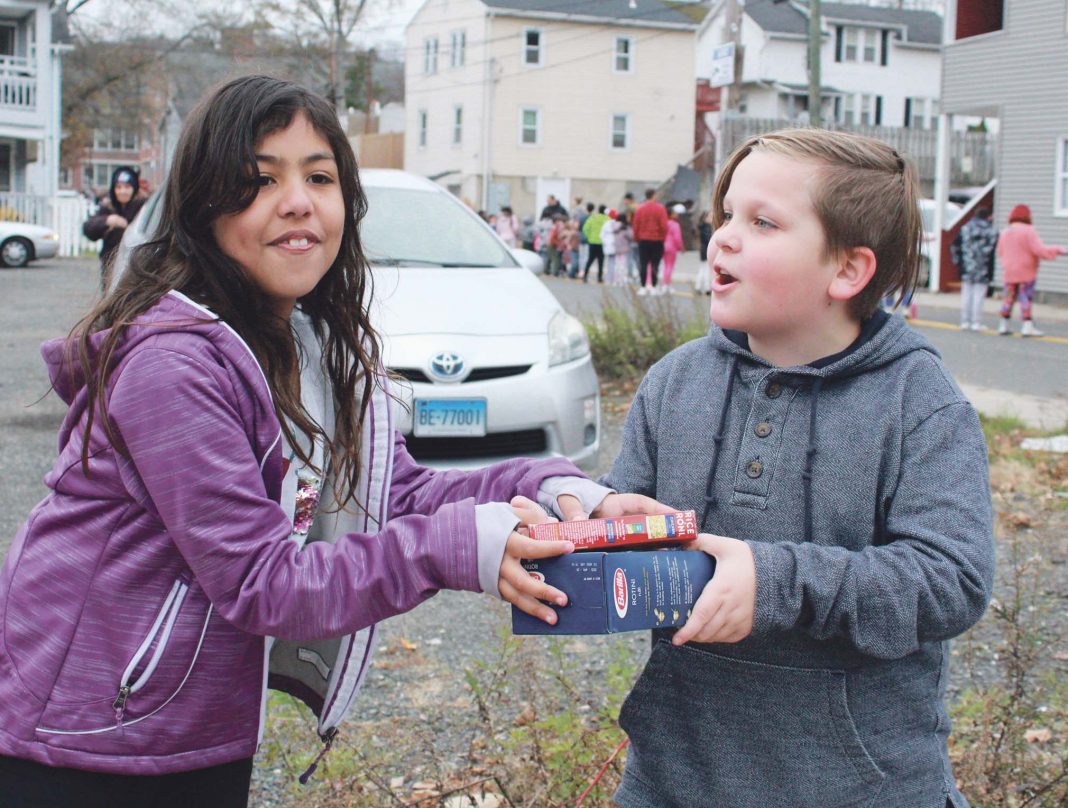 NAUGATUCK — Hop Brook Elementary School brought back its annual human food chain Tuesday, with a line of students passing items from one to another en route to nearby Naugatuck Ecumenical Food Bank.

Scores of students lined up in the middle of a closed-off Brennan Street to the corner sidewalk of Spring Street. The school at 75 Crown St. is less than a half mile around the corner from the food bank at 75 Spring St. Kindergartners through fourth-graders passed each other nonperishable food as donations to the food bank.

The event returned for the first time since 2019 due to the COVID-19 pandemic. The school has participated in the food chain at least six times overall, Hop Brook Principal Kathy Taylor said.

“We used to collect food around this time to donate to the food pantry and because we’re so close to the food bank, we thought how nice for the kids to see it’s right there — that we’re donating — because a lot of them probably didn’t even realize where the food goes,” Taylor said.

“I feel great,” fourth-grader Lucien Granica said, “because people need food every day to be energized.”

Classmate Malachi Moore added, “It’s important because some people don’t have food they can eat.”

Naugatuck Ecumenical Food Bank Vice President Gerhard Roland said he thought it was a great idea for students to give back again after a hiatus.

“To see them out there and be enthusiastic about their school, and then pass the food through the line was pretty cool,” Roland said, noting usage of the food bank has increased recently. “We haven’t gotten as many families as we had pre-COVID yet, but we have an increase in the last couple months where we’ve gone from 20 families a day that we serve to … almost 40.”

Taylor said students learn to help their community and be thankful for what they have.

“We have a food pantry here at our school,” she said. “A lot of our families benefit from the food bank at our school, so it’s very important for us.”