Thomas was born in Waterbury, Feb. 15, 1931. After high school, Thomas entered the service in the Army, but was chosen to be a Marine. He is a Korean War veteran. He was awarded the National Defense Service Medal, the United Nations Service Medal and the Korean Service Medal. After active duty, Thomas served in the Marine Reserves for the next six years at the Naval Submarine Base New London, Groton, Conn.

Thomas became a Master Electrician who was famous all around for his ability to splice cable. He started and ran Nutmeg Cable Company, Nutmeg Line Constructors in CT as well as a company in New Jersey. He performed such services as electrical installation in both the Holland and Lincoln tunnels in New York as well as the first storm sirens in areas of Conn.

Thomas was a lifelong member and retired from the International Brotherhood of Electrical Workers (IBEW). Thomas lived out his retirement in sunny Florida with his wife, Rose, staying active and golfing every chance he got. 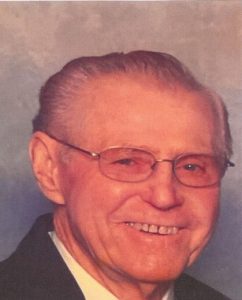 A Mass of Christian Burial was at the Catholic Parish of Middlebury and Southbury, St. John of the Cross Campus, 1263 West St., Middlebury. Military Honors followed the Mass. Calling hours were at the Buckmiller Thurston Mengacci Funeral Home, 82 Fairview Ave., Naugatuck. Members of the Naugatuck Veteran’s Council assembled at the funeral home.
To leave an online condolence, please visit buckmillerthurstonmengacci.com.