MANCHESTER — Mrs. Joan P. Coviello, 96, of Manchester, formerly of Prospect, died peacefully at home Tuesday, July 19, 2022 while surrounded by the love of her family. She was the wife of the late/widow of Domenic V. Coviello. Born May 18, 1926 in Waterbury, Joan was the only child of the late Emil E. Porzenheim and Delia (Horan) Porzenheim. 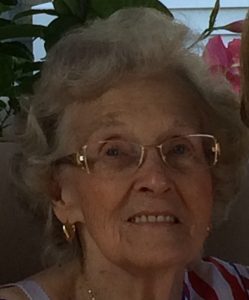 Joan was a School Secretary for the City of Waterbury Department of Education. Much of Joan’s early years were focused on the daily care of her daughter Donna, who was born with a rare debilitating skin disease. For all of the thirty-six years of Donna’s life, Joan lovingly and without complaint dressed her wounds daily and provided for all of her daughter’s needs. After Donna’s passing, Joan became an active participant in the Prospect Senior Center and was an avid reader and knitter. She knit hats and scarves for everyone, her hands always in motion.

Mrs. Coviello was a devoted Catholic and faithful communicant of St. Anthony’s Church, an avid UConn women’s basketball fan and was a nightly watcher of Jeopardy and Wheel of Fortune. She treasured time spent with family. Known affectionately as Mom, Gramms, or Nana throughout her 96 years, Joan lived through many changes, inventions, adversities and blessings, and historical events in the world. Her no nonsense approach, faith, and love of family will be always treasured.

Left to honor her love and cherish her memory are her daughter, Beth Coviello and her friend and partner, Brian Lazzerin, of Manchester, with whom Joan and her late husband lived in their later years; her grandchildren, Sean Krueger and his wife, Liz, of Bolton, Lauren Wiganowske of Manchester, Jeremy Wiganowske and his wife, Jen, of Enfield; and son-in-law, Donald Tisch of Middletown, N.J. Joan was also blessed with her great-grandchildren, Jackson and Maxwell Krueger and Gavin Wiganowske, as well as her granddog Quincy, several cousins, and her caregiver Rita, who’s compassionate, dedicated and respectful care was an immeasurable comfort to Joan and her family during the last months of her illness.
Joan was predeceased by her husband, Domenic, and her two daughters, Martha Tisch and Donna Coviello.

For information, directions or to share word of remembrance and condolence for Joan’s family please visit prospectmemorial.com.