He was the son of Alida (Bernier) and Eugene C. Lewis and a proud member of the Connecticut Society for Mayflower Descendants. Born at home on his grandfather’s farm in Prospect in 1929, Sonny, as he was affectionately known by his beloved uncle and six maternal aunts, grew up surrounded by family, fields, orchards and brooks that instilled in him a lifelong love for nature, birdwatching, hiking and gardening. 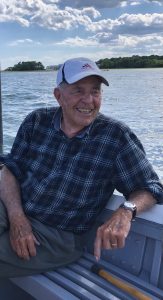 Growing up on the farm with a loving extended family in the midst of the Great Depression, instilled in him a spirit of self-reliance, and nurtured his strong work ethic, optimism and commitment to family, friends and community that would define him his entire life.

During his primary school years, he would walk to the one-room schoolhouse a mile down the dirt road where four grades sat together, warmed by a wood stove, learning their three Rs.

Gene graduated from Crosby High School and earned a B.S. degree in industrial administration from UConn ’52. After graduation he attended Naval Officer Candidate School in Newport, R.I., receiving his commission as an ensign later that same year.

He wed Doris Theroux, the beautiful girl he met at a church dance, just days before he shipped out on his first deployment during the Korean conflict in December 1952. He served three years on active duty, rising to the position of chief engineer on the destroyer USS Benner.

He later joined the Navy Reserve unit in New Haven, serving as its commanding officer before his military retirement in 1973.

Following the birth of five children in a six-year span, Gene started Lewis Construction Co. He dedicated his few spare hours on nights and weekends during 1960 to build, with his father’s help, his first house to accommodate his large family and a multitude of treasured pets.
Gene’s son, David, joined the business full time in 1977. It was during the 1979 oil embargo and energy crisis that the decision was made to redirect effort to the manufacturing division known as Foam Plastics of New England.

Together, Gene and David grew the division’s portfolio of energy conservation patented products, and it was spun off and renamed Polar Industries, now an industry leader in the development and manufacture of innovative energy conservation building products and systems.

Over the years, Gene cared for his parents and large family with tireless energy and joy, and was quietly generous beyond measure to many organizations in his beloved town of Prospect.

Eugene was a faithful and tireless caregiver to Doris, following a debilitating stroke until her death in 2016. His dearest friend Jim Davis helped him to construct an addition on his home so that Doris could continue to enjoy and receive the health benefits of the beautiful home and nature sanctuary that they had created together.

Gene’s yard in Prospect is renowned for attracting an unimaginable menagerie of birds and wildlife, so much that cars would stop to photograph the deer, turkeys, foxes and bears. Even Mayor Bob recently captured videos of a momma bear training her three cubs to dine at Gene’s many bird feeders.

Gene enjoyed more than 62 summers at Kelsey Island in Branford, being introduced to this unique paradise by his aunt and uncle, Lillian and Clayton Walters. He was blessed to form deep and lasting friendships with fellow “islanders,” and hosted decades of family summer camping, boating and fishing adventures.

The family would like to thank Senior Bridge, VITAS Heathcare, and all the friends and neighbors who have offered their love and support over the years.

There are no calling hours and funeral services were to be private.
Gene would be honored by your kindness to others with a donation to the Prospect Food Bank or Prospect Fuel Fund, 36 Center St., Prospect, CT 06712.
Prospect Memorial/The Palmerie Family Funeral Home is honored to serve the Lewis family.