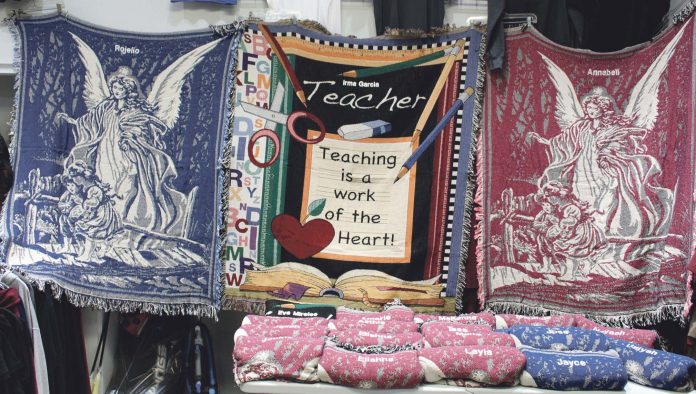 NAUGATUCK — A borough embroidery company and a South Carolina fabric and textile manufacturer have collaborated for the second time to give some form of comfort to the families of the Uvalde school shooting victims. 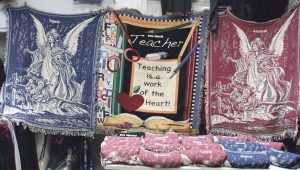 An 18-year old gunman shot and killed 19 students and two adults at Robb Elementary School in Uvalde, Texas, on May 24, 2022.

A retired Air Force veteran, former special agent and 9/11 responder who wishes to remain anonymous, said he started a blanket drive for the families of the Sandy Hook victims with the Federal Law Enforcement Officers Association, a nonpartisan, nonprofit professional association.

Weavetec Inc. out of Blacksburg, South Carolina, wove the blankets together before they were shipped to Team Image on Church Street where it was embroidered with the victims’ first names. Both companies made almost the same blankets for the Sandy Hook victims’ families as the Ulvade victims’ relatives. The only difference was the Sandy Hook blankets were green, white and gold while the Uvalde blankets were blue for the boys and red for the girls.

Team Image owner Loren Vorrase said the blankets are absolutely beautiful and her company’s part was just getting the names on the blankets.

“It’s very meaningful. It’s something that I’m very proud of that we do and that we donate to these people,” Vorrase said. “We can’t replace the tragic loss of their family member but hopefully we could provide them with at least a little keepsake for them to have.”

Vorrase said she was emotional just embroidering names on the blankets.

“It’s an emotional time just doing them because you think about the families and what they went through,” Vorrase said. “So we’re just very proud to be a part of it. I really don’t have too many words because it’s so upsetting for these poor families. I hope that they love them.”

The 9/11 responder’s friend, Sam Ganezer, who is a service director at the Blasius Chevrolet dealership in Waterbury, who knew about the blanket program offered a helping hand after he learned of the plan to send the blankets to Uvalde.

“I said I’ll help you do whatever you got to do to send them out because that would be nice to do,” Ganezer said. “That would be the honorable thing to do, if I can help I will.”

Ganezer shipped 21 blankets to the Rev. Eduardo Morales of the Sacred Heart Catholic Church in Uvalde on Jan. 9.

The Rev. Robert Weiss of St. Rose of Lima Church in Newtown, who has been at the church for 23 years including during the Sandy Hook tragedy, said about a decade ago the blankets for the victims’ families were sent to his church as 10 of those victims were parishioners.

“This is really another incredible way of how connected we are even though 10 years apart, how similar both of these tragedies but more importantly how people are still responding so lovingly even though we can’t seem to get an end to this gun violence, people are still, their lives are still deeply emotionally moved by them, especially when it comes to children,” Weiss said.

Weiss was able to get name of the pastor at the church where a number of funerals were held at Uvalde.

“We’ve got to work on mental health. We’ve got work on domestic violence, we have to work on gun control,” Weiss said. “Otherwise these situations are just going to continue.”