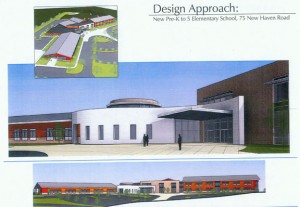 This design shows what the proposed new school in Prospect could look like. CONTRIBUTED

BEACON FALLS — After months of planning, Region 16 school officials are ready to take their pitch for a three-part, $46.7 million school building project to the public.

“I’m terribly excited to finally bring this to the citizens and have an opportunity to present the problems and the solutions that we have in mind,” Superintendent of Schools James Agostine said.

The Board of Education unanimously approved the conceptual designs and cost estimates for the project Oct. 12.

“Thank you,” Agostine said following the approval, “a new milestone has been reached.”

The project consists of building a new elementary school in Prospect, major renovations to Laurel Ledge Elementary School in Beacon Falls, and a new district office.

The new elementary school is by far the largest part of the project.

The proposed 85,630-square-foot, pre-K through school will be built on a 49-acre site at 75 New Haven Road in Prospect, known as the Tallmadge Hill Road property. Community and Algonquin schools will be closed and its students will attend the new school.

Agostine said Algonquin school is very substandard for teacher and student space, and lacks a gymnasium. He said since the district can’t house all of the elementary school students in Prospect in one school currently, there are inherent inefficiencies.

The district currently has separate cafeteria and custodial crews for each school. Along with the educational benefits of having all elementary students and faculty in one school, he said, the one school will also streamline operations.

“There’s a lot of efficiencies that would be gained by having everyone under one roof,” he said.

The proposed school will be a two-story, chevron-shaped building, which is designed to accommodate future expansion.

The first floor will house pre-K through second grade classrooms and the third through fifth grade classrooms will be on the second floor. At the heart of the school will be a media center and the main office. The school will also feature an open platform between the cafeteria and the gym to accommodate large school productions or events, an informal outdoor classroom, a new soccer/football field, and softball/baseball field.

The new school carries the largest price tag out of the three projects at an estimated $36.6 million.

Plans for Laurel Ledge include building new corridors to connect all of the buildings at the campus-style school. One science and one music classroom along with two new bathrooms will also be added to the school.

This design portrays the courtyard at Laurel Ledge Elementary School in Beacon Falls after the renovation project. CONTRIBUTED

While there will be some new construction at the school, the bulk of the estimated $7.75 million worth of work to be done at Laurel Ledge comes from renovations to the school.

“There’s a lot of deferred maintenance at Laurel Ledge School that we need to take care of,” Agostine said.

Agostine said the roof at the school is nearing its 25-year lifetime. He also pointed the state of concrete slabs that hang over doorways at the school. Last year, several of the slabs were taken down because they posed safety hazards, he said. The remaining ones are also showing signs of deterioration, he said, but aren’t safety hazards right now.

“They will be a problem five years from now,” Agostine said.

The bathrooms at the school aren’t compliant with the Americans with Disabilities Act and are as old as the school, which was built in 1953 with an add-on in 1983. The proposal would also renovate the courtyard.

After reviewing several options for new district offices, the board approved moving its central office to Algonquin School. The board currently leases office space for about $56, 000 a year.

The cost to make Algonquin in the district office is estimated at $2.4 million, with the majority of the costs coming from demolishing and abating the two-story wing. This design shows how Algonquin Elementary School in Prospect will be turned into district offices for Region 16. CONTRIBUTED

In total, the project is anticipated to cost $46.7 million. As a point of comparison, Agostine noted that it would cost about $55 million to build Woodland Regional High School today. The school cost about $36 million to construct 10 years ago.

The state will reimburse the district a little more than 68 percent on the project. After factoring in state reimbursement, the total cost to Beacon Falls and Prospect is projected to be about $19.7 million. The $19.7 million will be divided along the same ratio as the school budget with Prospect covering about 60 percent and Beacon Falls about 40 percent.

Although the project carries a substantial price, school officials emphasized that work at the schools will need to be done in the future and money will have to spent to fix the schools either way. Officials also expressed concerns that the state could lower its reimbursement rate in the future.

The feeling among officials was that if the project is put off now it could cost the district more money later.

“If we don’t do something now it’s going to be so much worse later on,” board member Sheryl Feducia said.

If everything goes as planned, construction at Laurel Ledge and the new school would begin in the spring of 2013 and be finished in August of 2014. Work on the district office project would start in July of 2014 and take about six months to complete.