Home News Citizens to audit Board of Ed. budget

NAUGATUCK— Concerned borough taxpayers will soon have a new forum for monitoring the embattled Board of Education’s administrative practices.

The committee’s purpose, in Fusco’s words, would be to monitor “efficiency, effectiveness and economy in the use and allocation of human, financial and physical resources” at the BOE.

The committee wouldn’t have any power other than the opportunity to make cost-saving recommendations to the school board.

Fusco noted that boards of education often hire professional auditors to check the books, but they rarely reveal corruption, waste or mismanagement. He cited Roslyn, N.Y, as an example. Fiscal audits have been conducted there every year, he said, but failed to uncover administrators’ embezzlement of $11.2 million to pay for personal indulgences.

Fusco said audit committees aren’t designed to uncover fraud, but to implement guidelines to prevent it. 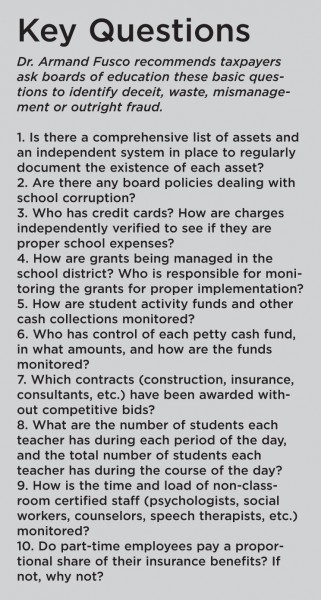 “Prevention costs nothing; it requires no extra staff and no extra money,” he said.

In fact there are some very simple ways school boards can reign in waste, according to Fusco’s thinking. First of all, they can set limits on reimbursements for teachers who attend conferences or otherwise spend on the school system’s dime.

“It would be impossible to find a school board with limits on reimbursements,” Fusco noted. “But a simple limit would end abuse in that area.”

Since these funds, which are accrued via bake sales, ticket sales, fundraisers and the like, are rarely monitored at a system-wide level, they are “the easiest area[s] to embezzle. … People don’t realize the amount of money in those funds,” Fusco said.

Additionally, he said, most schools have problems in asset management, which citizen’s audit groups could address.

“If you’re not tracking your assets,” Fusco asked, “what else are you not tracking, in terms of the tax dollars?”

The committee would also monitor administrative procedures to make sure they adhere to state-established “best practices.”

Of Naugatuck’s situation, Fusco said, “Had there been [an audit committee] in Naugatuck, the [deficit] … of $2 million would never have occurred. Was everyone asleep at the wheel? As a former school superintendent, I cannot understand how this could have happened, other than the board not doing their job of monitoring the district expenditures and budget process.”

Fusco will train Ciacciarella and the newly-formed committee in late January with a view to set them on track to monitor those very processes at the Naugatuck Board of Education, which faces a projected $2 million budget deficit this year.

Committee members will be volunteers and don’t need any special qualifications to participate. Ciacciarella indicated at least 15 people have committed to the cause. Several seats are still open, and interested residents can reach her at 729-8886 or anneciacciarella@yahoo.com for more information.

“I think [the committee] would be really beneficial to the community,” Ciacciarella said. “Education should not be political.”

And though the teachers’ union and Board of Ed. here in the borough remain political loggerheads in a sustained budget crisis, an audit committee based on Fusco’s recommendations would, ostensibly, be equally concerned about waste, inefficiency, and mismanagement by both staff and administration.

Fusco has worked with 12 school districts throughout Massachusetts and Connecticut—including Enfield, Trumbull and Redding—to establish citizens’ audit and review committees.

Trumbull’s BOE is now the first in the state to regularly publish its check register on its Web site. It has since been commended by the Federation of Connecticut Taxpayer Organizations for its implementation of this and other measures promoting transparency and accountability.

Enfield’s committee has, since January 2008, published four in-depth reports on various budgetary items. It recommended altering some schools’ energy capabilities to save money in the long term. The initial cost of retrofitting was about $2 million, though, and the measure was voted down in a public referendum.

In Redding, a recent, 260-page audit report by a citizens’ committee under Fusco’s guidance recommended a 17 percent budget reduction without increasing core subject class sizes or slashing kindergarten or sports programs. Those recommendations did include layoffs of extraneous staff.

The response from the Redding school board? A glance and a shrug of disinterest and indifference, according to Fusco.

“[School boards] are reluctant to have citizens’ audit committees,” he said, “but they have no choice; they can’t stop it. What I don’t understand is why [these boards] don’t want to cooperate with their own citizens. Why don’t they want the free help?”

The biggest problem in education today, he said, is school boards’ lack of training in how to monitor spending and curtail waste, fraud and corruption.

For now, he’s content to provide that training to independent citizens’ review boards, in hopes that they’ll gain traction as the concept catches on.